Pork is a succulent red meat. It has the stigma of being a fatty meat, but the lean cuts similar to other types of meat.

Every part of the pig is used, from sausages to roasts, through bacon or scratching. As it happens with most meats, the names of pork cuts and joints are different throughout the countries. Even the regions in a country may have a particular way to cut the pig.

Fresh pork of good quality should have firm flesh and fat. The flesh should have a delicate pink color, showing a fine grain, while the fat should be white. Bones should be pink, although they may have a bluish tinge. The rind, or skin, should be smooth, with no hairs. The skin will become the crackling on a pork roast.

Pork meat should be always well cooked, never rare. It is more flavorful when cooked on the bone, but some pork cuts are good to be boned, rolled, and stuffed.

Pork belly - A rather fatty cut, although it is usually cheap. It can be grilled, roasted, stuffed, or stewed.

Pork filet or tenderloin - A very lean cut that runs under and along the backbone. It can be roasted, steed, grilled, or fried.

Pork lower shoulder - It can make be used as a roasting joint or be used for casseroles, especially the knuckle end. Sometimes it is known as hand and spring.

Leg of pork - It can make a larger roasting joint or it can be cut into smaller pieces. The top of the leg, the fillet end, is often cut into steaks.

Neck and top shoulder - Usually boned, rolled, and stuffed as a large roasting joint. It can be divided into smaller cuts and then is good for braising and grilling.

As pork meat did not keep well, it was preserved with salt, or cured, into bacon, ham, and gammon. Bacon is pork meat cured in a salt brine for about two weeks, smoked after that or not, and it is usually sold in rashers. The gammon is the leg of the bacon cured in the same way as the rest of the meat.

Pigs trotters are used for making stock, salted and boiled, or used for hearty soups and stews. Pig cheeks and ears are used the same way.

Sausages are made by mixing lean meat with fat and seasoned to a traditional recipe. Often bread crumbs or cereal can be added. Sausage meat can be used as stuffing, or it can be encased into pig's intestines and divide into sausage links. These days, the casing can be other than intestines and usually the amount of meat in sausages is regulated by law in most countries.

Black pudding may look similar to sausages, it has a sausage shape and it is stuffed into pig's intestines, but the mix inside is made from pig's blood and fat, with spices. It is usually boiled or steamed before going to the market. Black pudding may also contain onion or garlic, as condiments, and cereals such as oats or rice, as filling. Other offal meat can find a way into some types of black pudding.

Once, before freezers and refrigerators, pork was only for the winter months as the meat does not keep well. Nowadays, pork meat can be enjoyed during the whole year.

Many people do not eat pork meat for dietary or cultural reasons.

Bacon is cured in salt brine for about two weeks. It might be later smoked. Streaky bacon comes from the belly.

A little fun with leftover pork 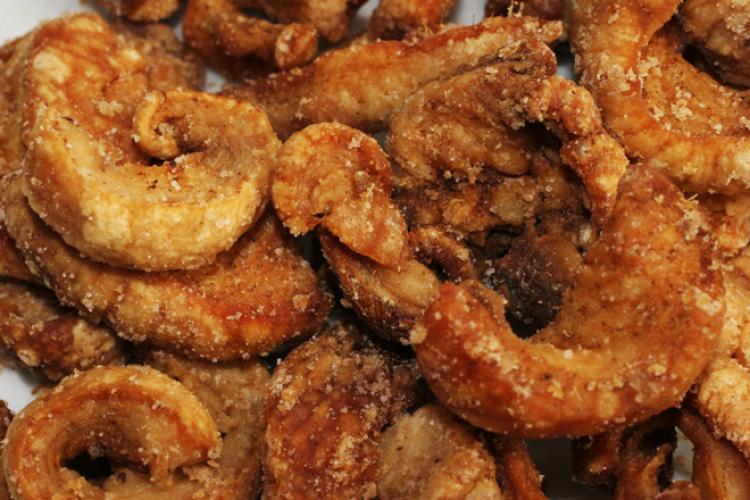